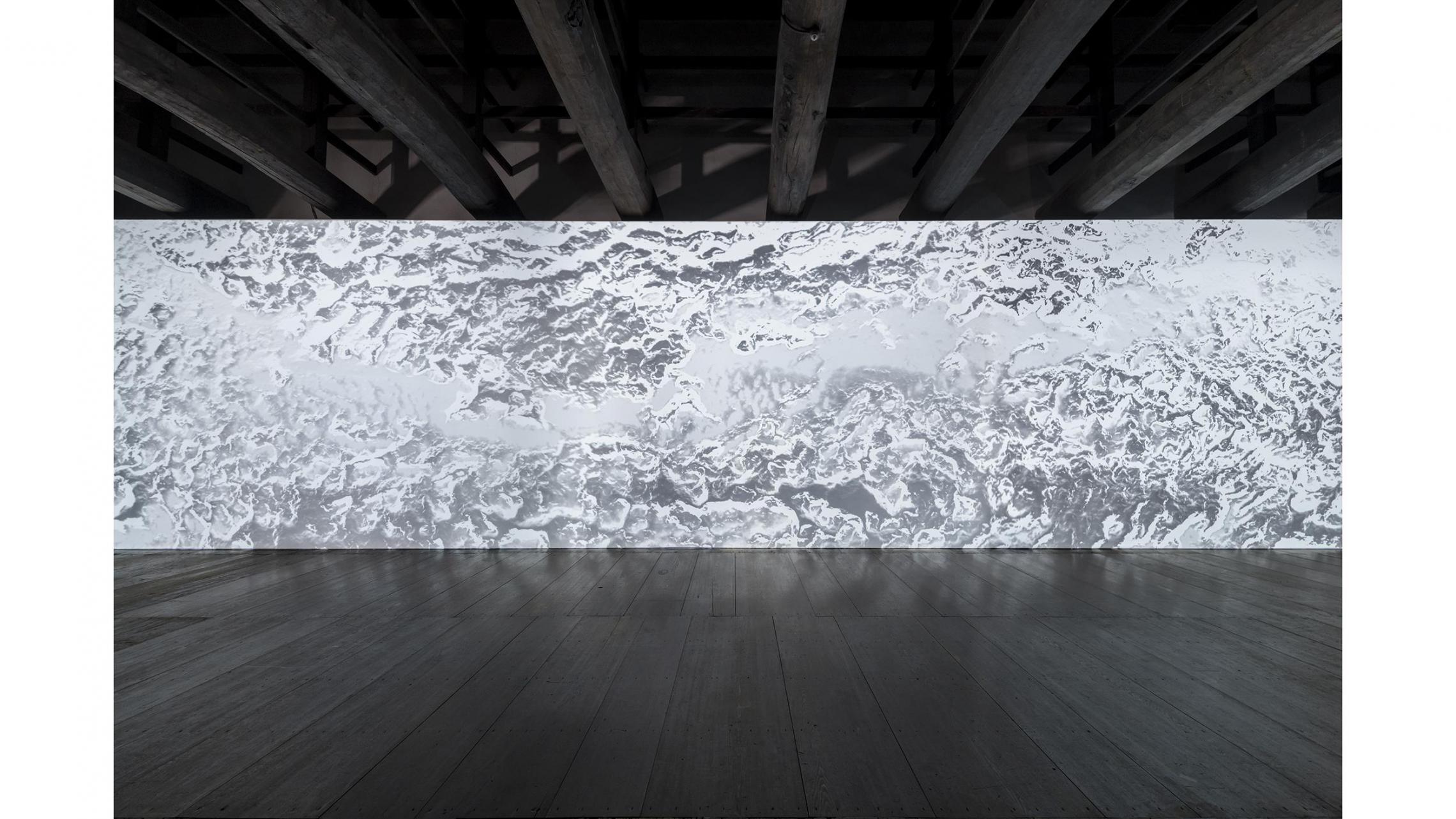 Kohei Nawa is known for conceiving and creating innovative sculpture that stimulates the viewer’s visual and tactile senses through the intersection of constantly changing form and organic images. His practice has explored and tested the boundary between living organisms and objects through installations involving continual motion that taps into the physical properties of materials, such as silicone oil that wells forth or froth that grows and expands in the darkness. In this exhibition, TORNSCAPE, the entire space of the gallery is filled with video and audio. Screens become skins transmitting information, enveloping the viewer much as the atmosphere and oceans envelop the earth.

In Nawa’s video installation Tornscape (2019-), fluids with different properties twist and turn together, continually reacting and transforming in a virtual landscape that covers an entire wall. In the underlying digital simulation, parameters representing factors such as wind speed and the mass and coefficient of the friction of particles have been configured based on meteorological and physical data, and manifest as the motion of countless particles. The video of multiple fluids coming into contact, reacting, and squirming together is generated by a unique algorithm and never repeats the same pattern. Inspired by the writings of Kamo no Chomei entitled Hojoki (An Account of My Hut) that describe disasters and epidemics that afflicted Kyoto about 800 years ago, this work depicts a world of transience and uncertainty in which everything comes into being one moment just to disappear the next, like bubbles on a stream, something that resonates with the times in which we live today.

The form of a fluid constantly changes shape, generated by the application of a program produced by researchers to model the formation of sand dunes on Mars. Images representing landscape transformation, such as meteorological satellite images of atmospheric convection, breaking waves, and spray and microorganisms getting carried off by the wind, convey a sense of profound scale ranging from the microscopic to the macroscopic. Suggesting the enormous impact on the natural environment of human activity, such as the increase in man-made substances and burning of fossil fuels, this world of imagination returns to the reality we face here on earth, arriving at a series of two-dimensional works in which the artist engages with physical phenomena by way of the medium.

Reminiscent of wet, black soil, Black Field (2020-) is a series of paintings produced using a material consisting of a mixture of oil paints and oil. The medium is applied in layers to a panel and a skin forms on the surface. This skin eventually cracks, and the liquid exposed and emerging from the cracks begins a new timeline. Changes in shape continue for weeks, during which the entire surface becomes textured as it contracts and fissures occur, in a process similar to that creating the textured surface of the earth. This perspective, capturing the horizontal movement of fluids, can also be seen in Nawa’s Dune series (2020-). The works in this series are created by mixing oil paints and other paints with different granularities, along with water, to achieve a certain viscosity, and then pouring and spreading this medium over a tilted support. The result evokes the local elevations of the earth’s surface and the circulation of its atmosphere, creating the perspective of looking down from above upon a virtual landscape, which adds further depth to the exploration that is the focus of this exhibition.

Natural phenomena observed in the atmosphere and on the surface of earth—including precipitation, clouds, winds, waves, sand, and soil—are measured daily and accumulated as an enormous volume of meteorological data. Kohei Nawa transcends the dichotomy between the man-made and natural worlds by interpreting phenomena as collections of particles and their motion. Intervening after the process through which natural phenomena are converted into data, he gives material form to the numerical data, seeming to breathe new life into the information. Change in the atmosphere and natural environment constitutes one of the most fundamental conditions for life, but in our everyday lives we sometimes lose sight of it or fall out of touch with it. This exhibition restores visual and tactile reality to our life-nurturing environment through a collaboration between the media of sound, video, and paint.