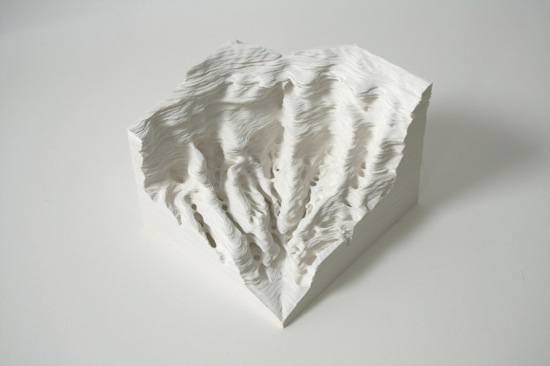 An exhibition surveying memories associated with certain "places," or corresponding with, or projected onto corporeal and spiritual "landscapes" and "spaces"

What is this vessel that houses our spirit? How big is it? What does it feel like? What shape does it take? These are the questions that creep into our consciousness as we confront the world views of Noriko Ambe, Yuko Nagayama, Kentaro Kobuke and Katsuhiro Saiki.

Noriko Ambe creates her works by cutting hundreds of sheets of paper into carefully calculated patterns and then layering them on top of each other - a simple process but one that requires exceptional concentration. The resulting sculptural works, small white solids with beautifully curving sides, have the perfect forms of high-precision mechanically carved three-dimensional models, but at the same time they possess a very organic sense of warmth. Not only are their beautiful forms reminiscent of topographic models or gigantic glaciers, their stately existence conveys a psychological tension suggesting the artist bases the forms on internal landscapes or particular views of the universe. They are a map of the psyche that takes form only through the gradual building up of two-dimensional layers. The works' strength lies in their representing the point at which the line between the self and the world is blurred and the two become one.

Kentaro Kobuke is known for rich and unique drawings in colored pencil that enchant viewers with their uniquely imaginative and expansive visions. Over the last year or two, during which time Kobuke has been based in London, a change has been discernable in his work. In the various elements he draws - the people, the landscapes - it has become possible to detect a subtle sense of transparency. From the outset Kobuke never drew the faces of his subjects, but now he has started to manipulate his people, with his tendency to depict their eyes as vacant voids becoming even more distinct. As a result of that his pictures seem freed from the task of telling the particular stories of, or becoming symbols for, particular people. With this newfound anonymity and universality, the works leave an even greater impression on their audience.

Yuko Nagayama, who focuses on the concept of architecture as a phenomenon, creates art pieces that serve as experimental devices to give physical form to her thoughts. Specimen of Treasure, the work exhibited here, consists of nine small sculptural pieces, each created from a photopolymer resin that hardens, or "cures," when brought into contact with ultraviolet rays. The technique, called "stereolithography," is particularly specialized and used normally in the fabrication of high-precision industrial models and parts. Normally you wouldn't think to create works of art using such a technique. Nagayama's approach can also be seen as an attempt to deconstruct the spaces and things we take for granted, and then to reconstruct them while incorporating elements of her own doubt and creative expression in the process. These works seem to transcend the existing confines of art and seem in fact to hint at answers to more scientific inquiries regarding the nature of the relationship between humans and objects and the way humans perceive of objects.

Katsuhiro Saiki takes what could be called a "sculptural" or "abstract" approach to photography. He chooses to cut up the scenes he captures in his viewfinder, rendering them unrecognizable by reconstructing them in two and three-dimensions. This particular way of presenting photographs is strongly influenced by Minimalism, with the artist deleting all traces of creative expression in order to simplify his subject and also utilizing repetition. The result is the artist's new form of creation. Recently Saiki has focused his attention on architecture, photographing famous buildings by the likes of Mies van der Rohe and Frank Lloyd Wright. He might repeat the image in a pattern or reverse it - all part of the process of turning it into something completely new. The very physical and spatial perceptions we depend on in our everyday lives are undermined by the artworks. But this labyrinth-like world of distorted architectural icons also offers many opportunities for quiet discovery. For this exhibition Saiki shows photographic collages and three-dimensional objects made up of photographs.

What each of these four artists has in common is that their works take the form of experiments: there is the artist self and there is the world he or she inhabits - but how should the artist conceive of that world and what should his or her output be as a result? That said, the works of art, which are the results of those various outputs, are only completed upon the participation of viewers. This exhibition will most closely resemble a kind of quiet mirror, with the interest being on how the various world views and conceptions of reality expressed by the artists will reflect in the eyes of their viewers. 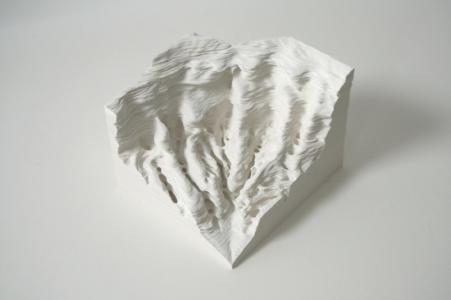 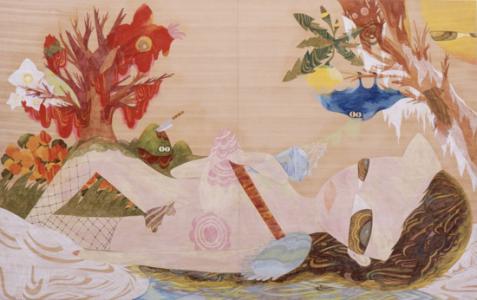 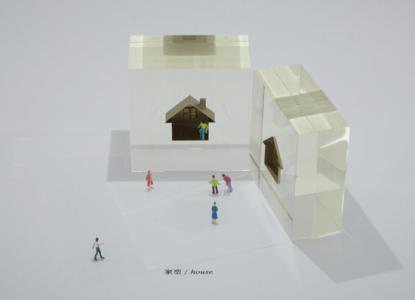 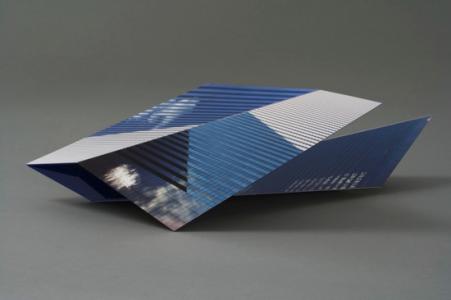 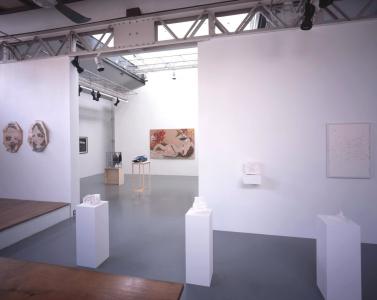 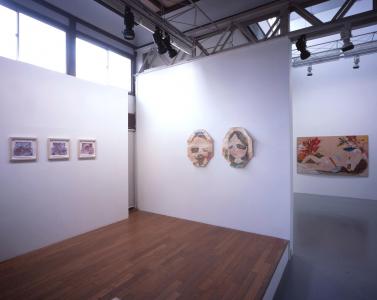 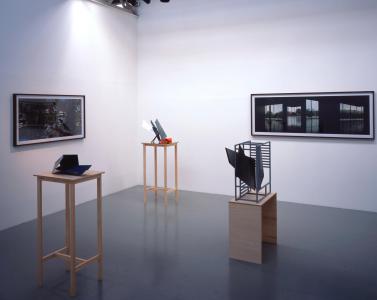 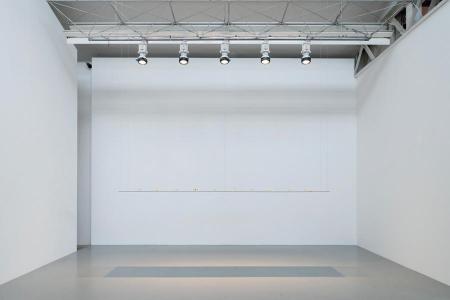